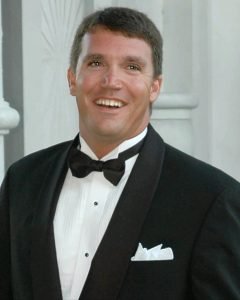 Anthony Michael “Tony” Kasapis
Anthony Michael Kasapis was born on November 11, 1972, and died July 23, 2022, after a courageous battle against LeiomyoSarcoma Cancer. He is preceded in death by his infant son, Anthony Michael Kasapis Jr., maternal grandparents, paternal grandfather, and maternal uncle. He is survived by his devoted wife of 22 years, Lourdes Mercedes Kasapis, his three loving children Gabriel, Isabel, and Sophia, his Grandma Connie, parents Michael and Terry Kasapis, sister Nikki and husband T.J. Senn, his nieces and nephews, aunts and uncles and a host of extended family and friends.
Anthony, better known as Tony, was born in Akron, Ohio. His family moved to Houston, Texas, when he was ten. They then moved back to Akron, where Tony completed his senior year at Garfield High School. Shortly after graduating high school, Tony chose to return to Texas, where he lived, and made a family bond with the Clancy’s. Once established in Houston, Tony pursued his Associate’s Degree in Business while starting his career in construction, where he proved his strong work ethic by working his way up to a superintendent position. During his extensive years in construction, he worked for Benchmark, Keystone Site Work, and most currently Longhorn Excavators Inc.
Throughout the years, Tony volunteered in various organizations; The Original Greek Festival of Houston, Houston Livestock Show and Rodeo- Corral Club Committee, Champions E.S.D. Station 11, Founder and President of the Westminster Landing H.O.A., and board member of NW Harris Co M.U.D. #16.
In addition to spending time with his family, Tony was known as a handyman, “The Pitmaster,” an avid outdoorsman and hunting enthusiast.
Tony was a devoted husband and father, loyal and faithful son, and a good friend to those fortunate to know him.
The bible verse that best captures the essence of this amazing man is 2 Timothy 4:7: “I have fought a good fight, I have finished my course, I have kept the faith.”
May he rest in the arms of our Father until we meet again.