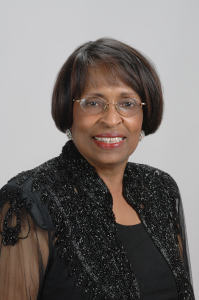 When Namon and Emma Gipson Collier welcomed their first born to the world, November 15, 1942 in Tyler, Texas they had no way of knowing that this tiny baby would one day impact lives throughout the world. They named her Billie Joyce.

She was later joined by five sisters; Emma Jean, Evelyn Kay, Juanita, Hazel Theresa, and Vanessa. Together the six Collier sisters grew and flourished under the Texas sun and the watchful eyes of their parents. Their mother was a housewife, spending most of her time volunteering at the school, so it is no wonder education played a key role in the Collier household.

Big Sister Billie developed a local reputation for being a brilliant young scholar. She began school at the age of 4 and developed a love for being creative, detailed oriented and a passion for leadership and management which existed long after her graduation from Redland Elementary and Bragg Morris High School.

Billie was baptized at Mt. Zion C.M.E. Church. It was then that she became involved in the Christian Youth Fellowship (CYF), served as a Youth and Young Adult Director and represented the church at District and Annual Conferences.

Billie began her formal education at Prairie View A & M College making her mark as the first member of the Collier girls to receive a degree from a Historically Black College and University (HBCU). It was there that she became a member of service and academic clubs. She graduated from Prairie View A & M College with a Bachelor of Science in Business Administration. She later returned and earned a Master of Education in Elementary Education and a Minor in Special Education. With a desire to continue her education she earned certifications in Guiding and Counseling and Mid Management from Sul Ross State University.

Billie enjoyed a distinguished career as educator for 42 years. She served in many capacities including school teacher, Administrative Assistant, Counselor, Special Education Supervisor, and Secondary Director of Human Resources. Her professional career began in Munday, Texas; but she later transitioned to Ector County where she spent the majority of her career. She was an active member of Texas Alliance of Black School Educators (TABSE) and the American Counseling Association (ACA). She was well respected and depended on by the Administrative, faculty, and staff of Permian High School where she attended and supported all activities her children participated in.

The true love of her life was John Reese Mayfield II; a handsome basketball coach she met while coaching basketball. Her team beat his team, he pursued her, and asked for a date, and many quiet chats blossomed into romance. It was a love that would last a lifetime. They married August 8, 1964. During this 56 year union they were blessed with two children. She possessed characteristics that embodied walking in the image of Christ. She exemplified grace and never failed to serve others. She was supportive of her husband for more than five decades. She cared for family and demonstrated to younger and older women what it meant to be a wife, mother, sister, employer and a child of God.

Billie and John always kept God forefront in their lives. They were members of St. Matthews Baptist Church in Odessa, Texas. She was a Deaconess and served as Financial Secretary for over 30 years. After transitioning to Pearland, Texas; they became members of the Windsor Village United Methodist Church. As a member she served in the following ministries: Tele care and Diamond and Pearls.

Billie was active in numerous civic and service organizations. She was a member of Odessa Junior League where she served faithfully on the Merry Market Committee. She was a member of the Prairie View A & M University Alumni Chapter, A Life member of Prairie View A & M National Alumni Association, Member of the Houston Livestock Show and Rodeo, Member of Etona of Pearland and volunteered annually for the Houston Ballet Nutcracker Market.

Billie was a Silver Star and Life Member of Alpha Kappa Alpha Sorority, Incorporated. She was a CharterMember of Rho Iota Omega Chapter in Odessa, Texas and held the office of treasurer for several years. One of her favorite service activities was “Dress a Living Doll”, where she would dress a needy child from head to toe for the holidays. Her major contribution to the Sorority was hosting the MIP process at her home for several years. After moving to Pearland, Texas, she transferred to the Alpha Kappa Omega Chapter and was an active participant on many chapter committees.

Billie enjoyed traveling both within the United States and around the world; taking trips to Africa, Asia, Europe, South America including Canada and Mexico.

Billie loved people, especially her family. Hosting inher home was her greatest gift. Her favorite holiday was Christmas which was evident by her home being adorned in beautiful decorations from the front entrance throughout her home. The decorations were admired and enjoyed by attending the Annual Ladies Christmas Brunch. Her touch of elegance and sophistication took an ordinary brunch to another level. Everyone wanted to be there. Never failing to have Christmas dinner with her five sisters, their families and her extended family like friends was the most peaceful, joyful, elegant dinner a family could have. These are memories to be cherished forever.

Billie was extremely proud and thankful for her children, John Reese Mayfield III and Joycelyn Yvonne Wade. She loved spending time with them and enjoyed hearing about their life accomplishments and spending Thanksgiving in Atlanta.