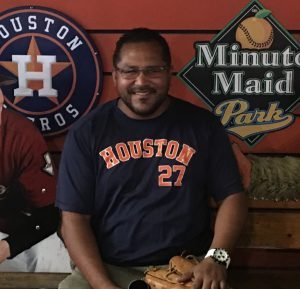 Eusebio Monsivais Jr was born January 31,1975. He passed away unexpectedly on Dec 2, 2018 at the age of 43. He was born in Houston,Texas to Eusebio Monsivais Sr and Petra Rivera Monsivais. He is survived by his wife Angelica Rivera Monsivais and their three daughters Diana and Tatiana Zapata and Mia Monsivais. He also leaves behind his Dog Blu and Cats Baby and Luna. Everyone knew him as Junior. Junior was born in Houston, grew up in Pasadena Tx. Junior was incarcerated at the Tdcj for 24 yrs. Through out those years, he and Angelica remained friends and wrote each other through all those years and Junior was falling in love with Angelica, they were soulmates. While incarcerated, he graduated from Lee College with an Associate of Applied Science in Microcomputer Applications-Networking and Associate in Science in Business Administration and Management. In 2016 he was released from Tdcj. He loved his beautiful life with his wife and children. He was employed thru Performance Communication and was their Ground Technician, He was their highest ground worker in the company with the most knowledge of all technical testing and terminations. He was a wonderful husband, dad,son in law, brother in law, uncle, cousin and friend. He was a very kind hearted person, everyone had a special place in his heart. He would do anything to help anyone who was in need no matter what time it was. He loved his dog Blu and his cats. He loved cooking his famous burgers. Junior loved collecting tennis shoes and caps. He was a huge fan of the Rockets, Astros and Texans. He leaves behind numerous Uncles and Aunts, cousins and friends. He will be missed tremendously. Pallbearers: Jose Ponce Jeffrey Foot Juan Manzanares Fred Aragon Louis Aragon Melvin J Precella Charlie Cantu Reyna Zap