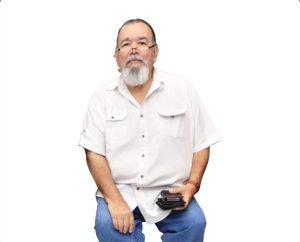 Joe Eddie Leal , born December 5th 1959 in Pasadena Tx to Joaquin Torres Leal and Sara Brandes Leal was called home to be with the Lord on April 23rd , 2022 at the age of 62.

Joseph’s biggest joy was his family. He loved each and everyone with his whole heart and in his own way. He may have never said those three words “I love you” very often but he always said “actions speak louder than words”. One thing is for sure, Joe always made it a priority to reach out to his family via phone call or a quick text message just to see how they were doing. He didn’t care if he had spoken to you two days prior and it ended in an argument he was still going to call or text you to find out if you were okay.

When Joe wasn’t tied up, in one of his many business ventures, he could be found visiting his Uncle Victor and Aunts Martha and Chito. Whom he loved as he loved his parents. Joe very rarely had any free time but when he did he also enjoyed thrift shopping.

His home away from home was Liberty Church of Christ where he gave his life to the Lord in 1992 under the mentorship of Bill Cauhthorn.

Funeral Services will be held at Church Of Christ in Liberty
3201 N. Main st Liberty Texas 77575