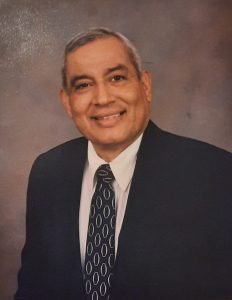 Juan Antonio Mireles passed away peacefully on November 26, 2022 surrounded by his family at the age of 81.

Juan, affectionately known to his family as “Bro-Bro”, was born to Brigido Mireles and Antonia Tijerina, the fifth of their six children on March 8, 1941 in Laredo, Texas. An avid fisherman from a young age, he enjoyed telling stories of his adventures; catching fish with no hook or bait by simply taking trotlines from local fishermen. Recess was his favorite subject because in his words he was the “fastest” kid. It must have been all the running he did while being chased by those fishermen that later helped him run high school track.  He worked in his father’s bakery and later passed that love of pan dulce (sweet bread) to his family.

He served honorably in the US Army from 1962-1965 and his experience in the Army played an important role in his life. He frequently shared stories about his Army days and the value of discipline and investing in causes greater than himself. He loved participating in community events with fellow veterans.

After his honorable discharge from the Army, Juan moved to Austin where he enjoyed working near the University and became a Longhorn fan.  His job eventually led him to Brazoria County. Juan was well loved in the community, helping care for countless children with his wife Julie in their home daycare.  His favorite hobbies included fishing, gardening, bird feeding, and playing Loteria.  He served the Lord faithfully as an usher, Sunday School teacher, bus driver, and Bible study teacher. His hope and faith in the Lord Jesus Christ gave him a positive outlook on life.  Only Heaven knows the full impact of his faithfulness as God’s servant.

Juan was preceded in death by his parents and brother Brigido Mireles. He is survived by his wife, Julieta Mireles; son, Norman Mireles; daughters, Monica Razo, Lurisa Trevino, Shirley Smith, Nora Boehm, and Natalia Mireles; brother Roberto Mireles; sisters Anna Perez, Elva Robinette, and Gloria Deitrick; many grandchildren, nieces, nephews, and a host of relatives and friends.  We will all miss Juan dearly.

A service to celebrate his life will be held on Friday, December 2nd at 10 am at New Beginning UPC, 438 Hardy Street, Clute, TX. Interment will be at Houston National Cemetery, 10410 Veterans Memorial Dr, Houston, TX with Military Funeral Honors to be held on Monday, December 5th at 2:15pm.